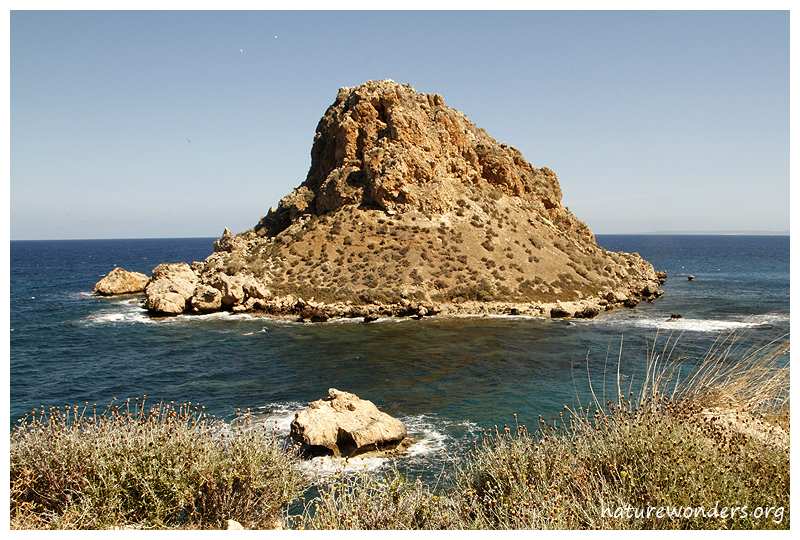 With thanks to Cemal from Vouni King Hotel for showing to me this wonderful place.

Description: Yeşilırmak Kayası | Petra tou Limniti is a tiny island in Yeşilırmak in the north-west of Cyprus, which lies about 80 m from the shore. It is only 150 m in length and 105 m wide, with very steep north and west sides.

History: This is one of the oldest places in Cyprus to be inhabited during the pre-pottery Neolithic period. When the Swedish Cyprus Expedition (1927-1931) excavated the palace of Vouni, the members took a swimming tour to the small rocky island. Here they discovered the remains of some huts from the Neolithic period and it was the first time that the Neolithic period had been attested in Cyprus. During two summer weeks in 1929, the expedition excavated the site. The top of the island is only accessible from the east. Here is a small plateau with a rough surface apart from the centre, and it was here that the remains were found of two rather primitive huts with several phases, Petra I–IV. In phase Petra III the hut is clearly divided into a living room and a kitchen with a hearth placed against the wall of the room. The finds were objects of flint, stone and bone, mainly working tools, bowls and idols. The dating of the finds is to the pre-pottery Neolithic IA–B (c.8200–5900/5600 B.C.).
It must have been an island even then, though the sea level was probably lower than it is now, since no Neolithic remains have been found on the adjacent headland. Probably it served as a very exposed temporary camp for fishermen from time to time, as the occupation levels imply, lying piled one above the other.

Biology: This islet is an important nesting place for the Yellow-legged Gull (Larus michaelli) which find there a quiet place and plenty fishes around. The islet is also used by the European Shag ( Phalacrocorax aristotelis desmarestii).