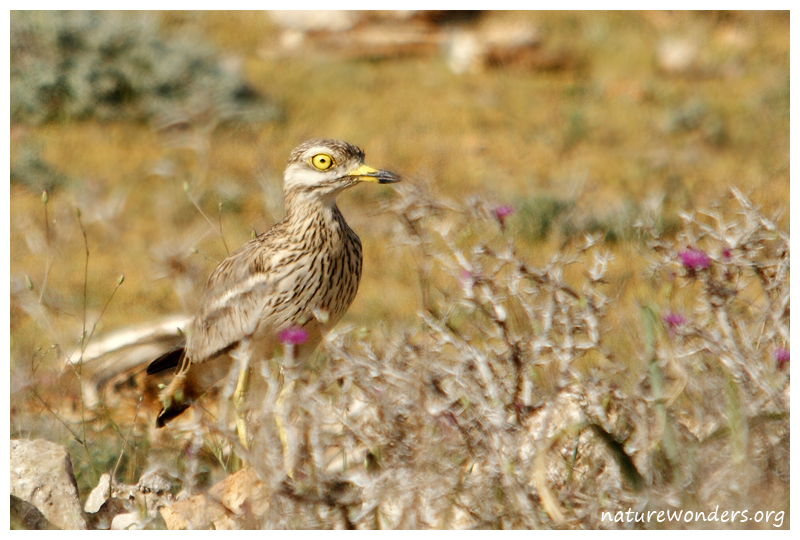 Description: Burhinus oedicnemus is a fairly large wader though is mid-sized by the standards of its family. Length ranges from 38 to 46 cm (15 to 18 in), wingspan from 76 to 88 cm (30 to 35 in). with a strong yellow and black beak, large yellow eyes (which give it a "reptilian", or "goggle-eyed" appearance), and cryptic plumage. The bird is striking in flight, with black and white wing markings.
4 subspecies are described:
• B. o. oedicnemus – South Britain and Iberian Peninsula to North Balkans and Caucasus
• B. o. saharae – North Africa, Mediterranean islands, Greece, Turkey to Iraq and Iran
• B. o. insularum – East Canary Islands
• B. o. harterti – Volga River to Turkestan, Pakistan and extreme North West India

Biology: It is largely nocturnal, particularly when singing its loud wailing songs, which are reminiscent of that of curlews. Food consists of insects and other small invertebrates, and occasionally small reptiles, frogs and rodents. It lays 2-3 eggs in a narrow scrape in the ground.

Habitat: Despite being classed as a wader, this species prefers dry open habitats with some bare ground.

Distribution: The stone curlew occurs throughout Europe, north Africa and southwestern Asia. It is a summer migrant in the more temperate European and Asian parts of its range, wintering in Africa.