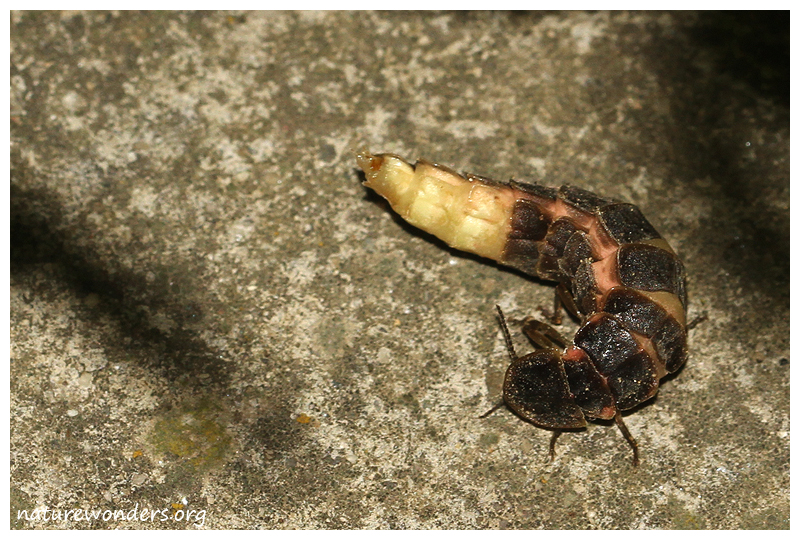 Description: Lampyris noctiluca presents a conspicuous sexual dimorphism. The males are winged, with brown elytra, a clearer pronotum and a large brown spot in the middle, while females are larviforme, wings are missing and they are often twice the size of the males (up to 25 millimetres in length).
Larvae and adult females look similar, however larvae have light spots on each of 12 segments, whereas adult females have a completely black back.

Biology: The predatory larvae feed for two or three years on slugs and snails which they inject with a brown toxic digestive fluid, delivered by a series of nips and bites. The poison takes a while to work, and the larva has to be careful not to become stuck to any protective mucus that its prey may secrete. The prey is gradually paralysed and the digestive fluid turns part of it into a brown broth that the larva can lap up. The prey remains alive, and some partially eaten victims have been known to crawl away after the meal.
The slugs and snails are often 200 times the weight of the beetle larva. The larvae are nocturnal, and are most active during moist conditions, when their prey are most active.
They become adults from May to July, eating little, surviving on food reserves built up during its time as a larva, and dying after reproducing.
The larvae may moult four to five times in their lifetime. They spend their winter under logs, stones, wood holes or leaf litter, their bodies drawn in like concertinas, hibernating as their food source becomes increasingly hard to find. They wake up in spring, and the cycle is repeated for one more year.
These beetles use their bioluminescence to attract mates. The adult females are mostly famed for their glow, although all stages of their life cycle are capable of glowing.
Light production is vital for Lampyris noctiluca. With it they have greater chances of mating, so there is a complex process involved.
They emit yellowish-green light from the translucent underside of their last three abdominal segments to attract the smaller males, which are winged. They will glow for 2 hours and then retreat back into their hiding place until the next night, or stop glowing as soon as they find a mate. The females can survive up to 10 consecutive nights doing this.
The light can be seen by males up to 45 meter away. The light is emitted continuously, although they will wave their abdomens from side to side, which gives the impression of it brightening and dimming. Larvae are sometimes seen to glow, although they seem able to turn off their light more easily than the female, especially when disturbed.
The insect can regulate its light production by controlling the oxygen supply to the light emitting membranes containing luciferin. The chemical reaction producing the light from luciferin is catalysed by luciferase, the exact chemical structure of which is determined by the glow worms individual genetic structure, which in turn determines subtle differences in the light produced from individual to individual. Virtually all of the energy produced is light; only 2% is heat.
The brightness of the glow is used by the males as an indicator of female fecundity. Males are more likely to fly to a brighter female, because it is larger and has more eggs.
The males are sometimes attracted to man-made light fixtures.
The peak glowing period is evenings in June and July.
Once the females have attracted the males with their glow, they mate, lay eggs, and die.
Typically 50–100 are laid over 3 days, the adult not surviving to see them hatch. They are laid in fairly moist places, e.g. stem of grass or under moss.
The eggs are pale yellow, 1 mm across. They may glow faintly yellow and take between 27 and 45 days to hatch depending on the weather (colder=longer).
The eggs hatch after 2 or 3 weeks.

Habitat: They are found in old-growth grassland, especially on chalk and limestone soils. They are also found in verges, hedgebanks, and on heaths. The larvae live in sheltered places – under rocks and wood, but do crawl over different terrains.

Distribution: The range of this beetle stretches from Portugal and Britain in the west, right across Europe and Asia to China in the east. It also survives further north than any other firefly, almost reaching the Arctic Circle. It is not found in North or South America.